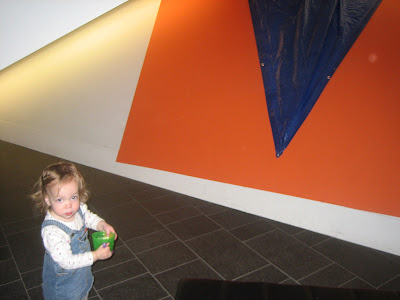 Several years ago, The Denver Art Museum worked with starchitect Daniel Liebeskind, he of the Holocaust memorial and the ill-fated Liberty Tower at Ground Zero, to create a massive addition to the building, doubling the museum's size and drawing criticism for Liebeskin's trademark jagged edges and tilted walls- full of affect, but not so great, practically speaking, for hanging art. The new curator of Contemporary and Modern art, a German import who I met in September when interviewing for a position with the DAM Contemporaries, a membership group at the museum, devised an exhibit to embrace the museum's quirky space: 17 artists were invited from around the world to create site-specific installations that take advantage of the galleries strange angles and lofty walls. Yesterday, I dragged everyone along for the Free First Saturday (including one of Dave's fellow students, Ciny, her 4-year old son, Xander, and her mom, who is visiting from Arkansas), to check out whether or not the exhibit- named, quite literally, Embrace!- met its goals.

I'm not sure I can effectively answer that question: I spent most of the time serving up snacks and scrambling after Eleri, trying to keep her mitts off the artwork. But I will say this: The Denver Art Museum is perhaps the best I have seen when it comes to family friendly programs. You may not ultimately see much art if you focus on all the kid stuff, but the kids will feel as if they have spent the day in a very cool playground.

Case in point: On the ground floor of the new building there was this room full of words. 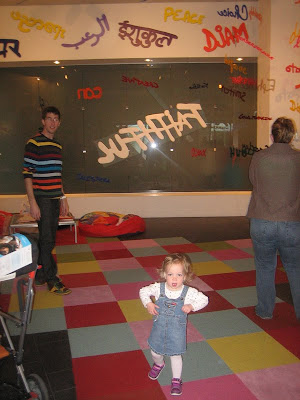 Not only were there styrofoam words hanging from the ceiling and colored acrylic words cascading infront of the windows, but there was a pile of beanbag words for kids to jump into- several older children were smashing each other with "sandwiches" and "leisure." 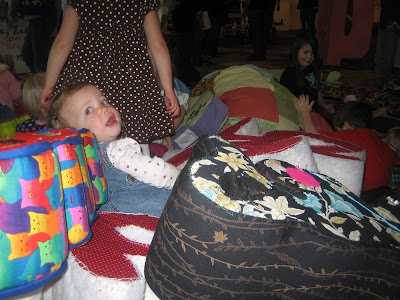 The walls were also papered with words written by guests to the museum. Clio chose "rabbit" for her word likely after the stuffed toy she found in the car and snuggled with on the drive from Boulder. 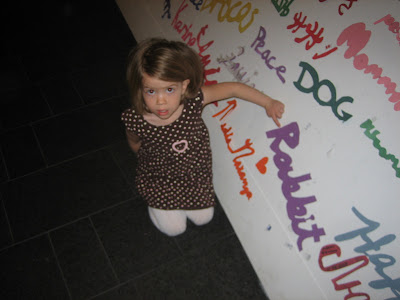 I have been noticing since Thursday that the word "Cancer" is also all around you if you are sensitive to it, like the bumper sticker on the car next to ours in the parking garage that read "Stupid Cancer," and sure enough: there it was. 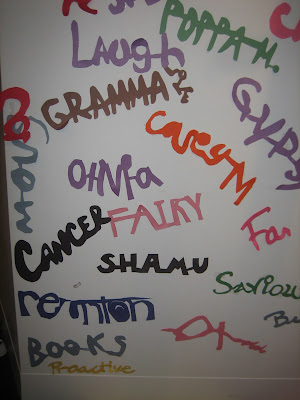 After spending much of the morning swimming in language, we did manage to at least make our way through the exhibit, with Clio "explaining" the work to Xander as we went. 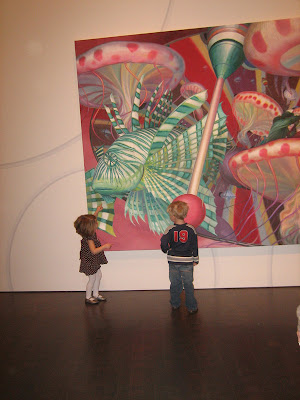 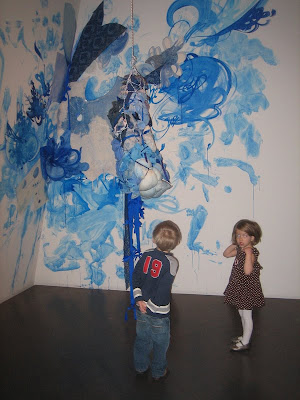 She's quite an expert. When we got to this installation on the second floor, she declared that it was "not art" and suggested that we move on. 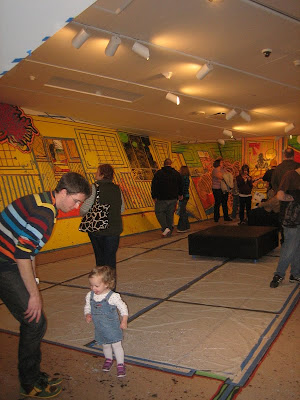 We didn't argue.
Posted by Heather Peterson at 4:17 PM