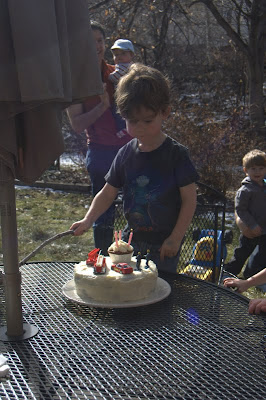 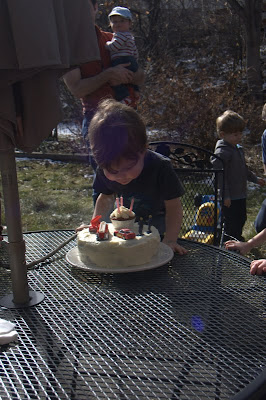 It's become a bit of a joke in my mind, but when hanging with the Desautels-Steins, we like to do things "two ways". It started with chicken two ways, which then, absurdly, got double to chicken two ways, two ways, which I know I have mentioned here. My brother Brian picked up on it, and for Christmas, he made Dave's gift two ways, two ways: high and low root beer (a fancy schmancy variety six pack and a dollar store jug) and Flight of the Concords on DVD and CD.

Last weekend, we joined Dakota in celebrating his third birthday, twice. Friday night, for his actual anniversary, we headed to Chuck E. Cheese, just our two families. And Saturday morning, we joined a throng (15 kids and various attendant parents) for the official birthday party.

A few days before all the celebrating began, one of the women I work with recounted her own daughter's recent sixth birthday party: they had invited just six kids from school, but a few days later another classmate sent out invites to his party for the same day--and invited the whole class. Andrea shared with me the heartbreak of waiting with Joanna to see if any of her chosen six would forsake a party with bouncy castles and the whole school crowd, her relief when one did show up, and her daughter's resilience in seeing the bright side of this: that she really got to know that one little girl. It occurred to me that Clio is old enough now (already!!) that these kinds of social situations can be crushing, and I was glad that we had our own special celebration with Dakota in the Chuck E Cheese bedlam. 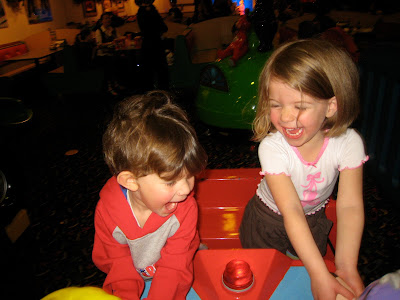 Still, on our way to Dakota's house the morning of the party, we talked a lot about how many other kids would be there, that Dakota might not be able to spend as much time with her as she was used to, that Amy and Justin might be too busy to notice that Clio had chosen a special party dress for the occasion. As it turned out, we were the first to arrive and the last to leave (A Duggan family tradition); Amy and Justin both commented on Clio's dress and helped Clio get bagels with cream cheese and fruit and other food as desired; and the Birthday boy opted to sit next to Clio for lunch. 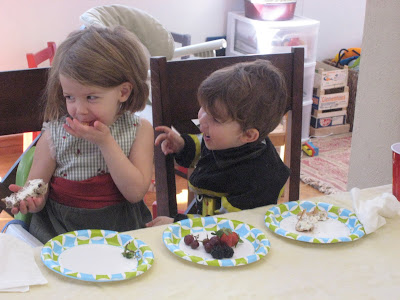 For much of the afternoon, as I ran after Eleri, who insisted on swinging rakes and brooms around the yard with some clear potential for a guillotine effect, Clio kept herself busy convincing other people's dads to push her on the swing anyway (Dave was at school), 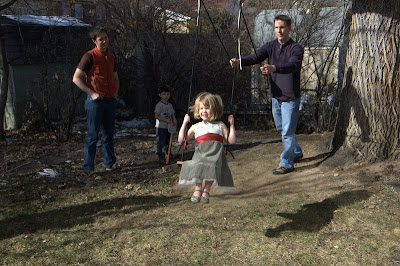 and it made me realize yet again that I often choose the wrong moments to be over-protective, that Clio is a big girl, and that, in many ways, we are still in the period of resiliency before the social thing gets really tough.

At the same time, watching the two of them together validated the idea that 3-year-olds can, and do, have real friendships. When we left New York, I was terribly worried about separating Clio and her best friend Elsie, but I think I figured they were little enough to move on and forget. Every once in a while, though, and seemingly out of nowhere, Clio will say "I want Elsie." When I explain that we live far away now, and that we would need to take an airplane to visit, Clio is undeterred: "okay," she'll say, very matter-of-fact, like she has solved everything, "let's take an airplane."

Elsie's dad just told me that the other night, Elsie put on her purse, and when he asked where she was going, she just looked at him and said, "Colorado."
Posted by Heather Peterson at 10:15 PM