We make just about every meal around here, including packing lunches for all four of us. This requires weekly meal planning and grocery shopping and a little ingenuity about weeknight dinners. While we do have a bunch of standbys, we average about 2 new recipes per week, many of which hail from Cooking Light magazine. I like this magazine not so much for the "light" (in fact, we often use real eggs when eggbeaters are called for and Dave never measures the oil according to their standards), but because it offers healthful meals that are easy to make, and has a host of special columns targeting a number of common cooking problems: Dinner Tonight and Superfast for when time is scarce, Budget Cooking for when money is scarce, Inspired Vegeterian for when meat is scarce, and the Enlightened Chef for global cuisine, among others. In addition, they have "cooking class" which covers basic (and not so basic) cooking techniques, and offers recipes to test them out. The magazine also recently got a facelift, with a new editor in chief and new design, and it seems to have stepped just a step or two forward into today.

I pulled about half of the recipes out of the most recent issue, and actually chose four of them to test out this week. Monday we had Roast leg of lamb with chili-garlic sauce and tonight we had Lentil-Barley burgers with Fiery Fruit Salsa: basically homemade veggie burgers. I like to experiment with this kind of recipe because they are scalable for the kids: while the salsa (and the lamb's sauce) had a bit too much heat for the girls, they ate the burgers (and the lamb) with ketchup and enjoyed the leftover mango and pineapple on the side. Here's how it turned out for the grown-ups: 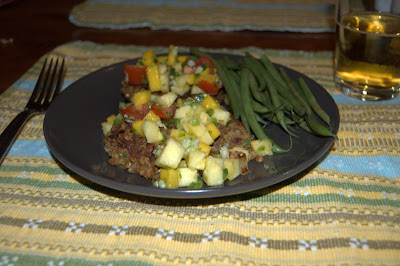 I have to say, the combination of cumin in the patties with the tropical, slightly Mexican salsa (from the serranos and the tomatillos) was really quite delicious. These burgers were not, in the end, the most practical for a weeknight, and they happened in stages, with Dave cooking the lentil and barley and sauteeing things and food processing it all a couple night ago, and just cooking up the patties tonight, so I'm not sure they'll go into the regular repertoire. For vegeterians though, or anyone who loves veggie burgers, I would triple the recipe and freeze a bunch of patties for a rainy day.
Posted by Heather Peterson at 10:35 PM

How inspiring. I love food and cooking. I have secret dreams of becoming an organic farmer and cooking all the time with stuff picked from the yard. If only... Anyway, wanted to mention the epicurious app. Do you have an iphone? They have super duper fast recipes for weeknights that they update all the time. I think maybe even every week. They also allow you to email a shopping list to yourself based purely on the recipes you've chosen for the week. Awesomeness.

I am impressed and irritated by your culinary skill and fervor. 80% of what my children eat comes from the same list of 10-15 boring favorites. Plus, I don't have the energy to cook like this. Please move back to Minnesota so that I can come over for dinner.