You know how people in design magazines (home or fashion) are always talking about finding the PERFECT authentic designer whatever on the curb and bringing it home to love? Kate Bosworth is on the cover of Lucky this month, and the story includes a photo of a vintage Michael Kors skirt that she got in Detroit (or somewhere random) for $15. And while I have to wonder just how vintage Michael Kors gets, I can relate to her sentiment that "they didn't even know what they were sitting on." One woman's trash is another woman's design magazine nonchalance.

Well. I'm coming to the end of my decorating budget, and I had JUST been complaining to Dave how I never fid what I am looking for for a steal, when I found exactly the right 70s campaign-style dresser on Craigslist for $75. Not super cheap, but also WAY cheaper than a new dresser or a great vintage dresser in a store. I immediately called the phone number only to be told that it was going up for AUCTION. The upside: I would probably get it "even cheaper." The downside: I would have to wait more than a week, and risk losing out on it altogether. As the week progressed, I was the only bidder, and the price was a cool two bucks. And I realized: they didn't even know what they were sitting on! There was some action in the middle there, but guess what? I won. Oh, yeah. 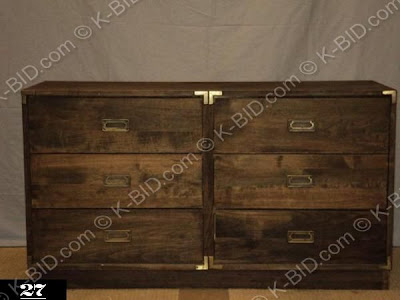 Final price: $35.
(plus tax and commission, making the actual out of pocket cost around $42. Oh, and bonus: its from the jobs foundation, which works to maintain living-wage jobs, so its almost like making a charitable donation, to boot.)

It will probably go in the girls' room (but it may end up in our room, who knows?) I'm thinking of painting it white, nicely offset by those brass corners and drawer pulls. Won't that be cute with pale blue walls and raspberry headboards?

Look at me, creating yet another project before I have completed the dining room curtains or even begun the headboards. But it feels like it might just be coming together.

Next up: hauling my butt out to Plymouth to pick up the dresser. I sure do hope they help load up the car.
Posted by Heather Peterson at 10:13 PM

Congratulations. I was actually wondering yesterday what had happened with this particular item and forgot to ask. so many options for a great piece. mom

Holy moly, WHAT A FIND! Please pass some of that karma westward!!! :)