The Great Minnesota Get Together

That's right, it's State Fair time, and since we live here now, I found myself confronted with a question: am I a Fair person, or no? In answer, consider that at least five times in the first half hour of our visit I told Dave, or mumbled under my breath, or spoke to the universe in general: I hate it here. The crowds! The smells! The lack of order in the lines! The slow-walkers, the stroller-roller-over-feeters, the gaggles, the strings of people going this way and that!

Yet. We spent five hours there instead of my original estimate of 2ish. The girls loved it. We saw baby piglets suckling the biggest sow I've ever seen. Clio got to pet a brand new chick. We ate delicious thing we otherwise would not have eaten. Why is it that Fair accomplishments are measured in food? At an (unrelated) picnic yesterday, we asked for recommendations of what to do on our Fair visit, and all of the suggestions were what we should eat.

So, for the record: 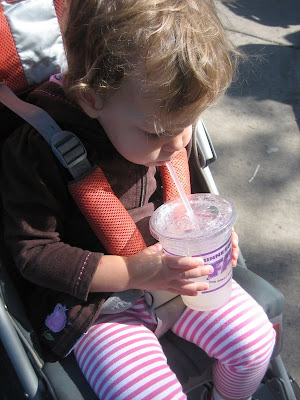 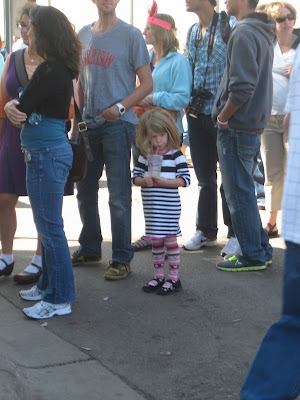 - Fried marshmallow-chocolate-banana sandwich (the girls were each allowed a bite and each declared "I don't like it" despite the powdered sugar, to which I replied "great, more for Mommy" and to which Dave replied "great, less for the girls.")
- Popcorn chicken (the girls)
- Pronto Pup (Dave. Yes, the elimination diet has been eliminated)
- Chicken Skewers (Me, Nonny, Papa)
- Fries
- Tom Thumb Donuts (even better than I remember. My mom says we used to go to the talent show with our friends the Ericson girls and EACH get our OWN bag. Splitting them 5 ways seemed more like it)
- Chocolate-Vanilla twist ice cream cones 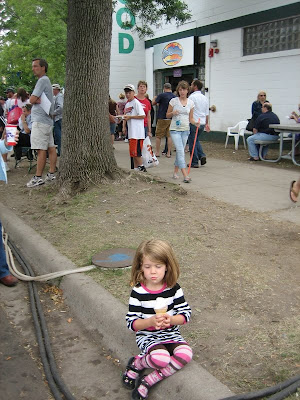 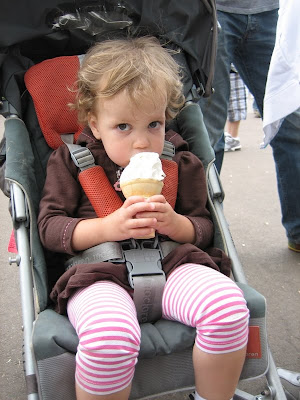 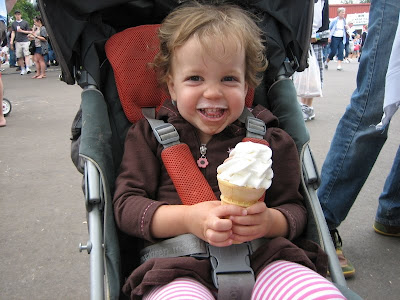 We were also divested of our monies at the Kidway, where a ticket is 75 cents and most rides cost 5 tickets, so you do the math. (Okay, actually, thank you Papa, for bank-rolling this portion of the days entertainment.) Plus Eleri was too small to go on most rides without a (ticketed) adult. That can add up!

Two years ago we tried to get Clio on a ride, with mixed results. The operator actually stopped this one to get her off: 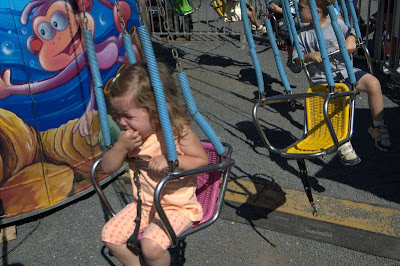 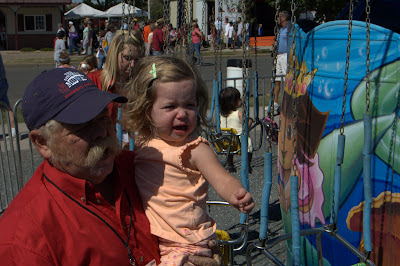 And then she decided to try again, with no better outcome even with Nonny along for the ride. 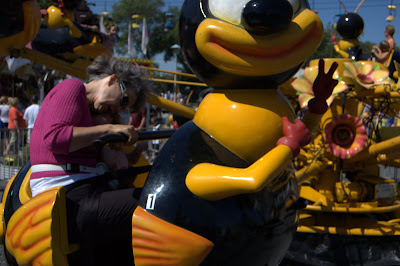 This year, the tears came when we had to forcibly remove the children from the rides when they rolled to a stop, such was the joy of the kiddie-rides. (Each ended with the resounding chorus of More!) 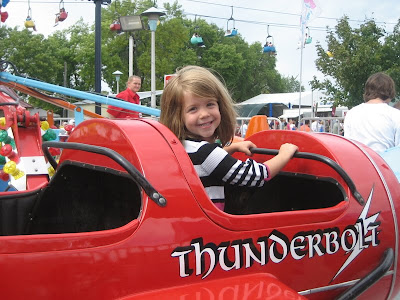 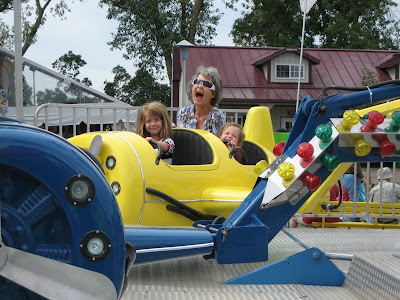 My favorite of the day was probably the mini-giant slide, which the girls went down with Dave, me, and my mom. 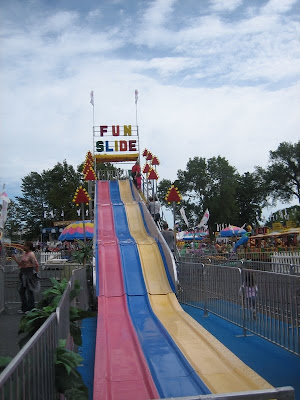 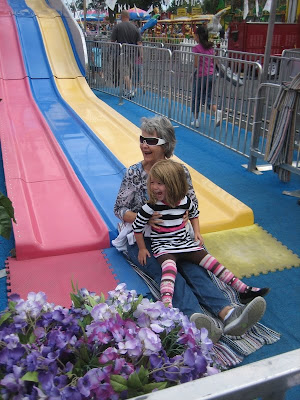 There is an actual GIANT slide at the fair, and apparently the guy who built it has built, like, 40 of them and is a millionaire. His daughter got married at the top of this one, and the whole wedding party slid down, which is really pretty adorable as far as appropriate theme weddings go. And hey, look, a picture with all four of us in the frame! Bonus. 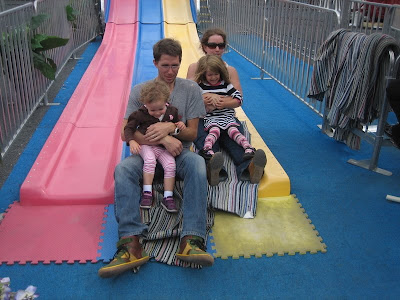 After the ice cream (about an hour into the time when Eleri's nap should have been), things slowly unraveled. Our final stop was the agriculture building, where I was hoping to see some prize-winning peppers and giant pumpkins, seeing as we're on this home garden kick and the girls are all about picking raspberries from the bush on the side of our house. Instead I discovered that Minnesota has a wine country and you can get flights of wine at the fair (though what to pair it with is a mystery, as I don't recommend drinking wine with anything that comes on a stick. Call me elitist), and got super psyched for next weekend's Excelsior Apple Days, the arboretum, and future apple picking excursions, so thanks for that, Hall of Agriculture. 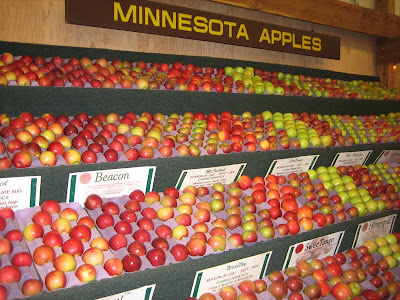 We're beat tonight and we'll probably all have a food hangover tomorrow. Do I need to go back? Not for about 362 days. But who knows, maybe I'll turn into a Fair person after all.
Posted by Heather Peterson at 12:17 AM

I did not know they had a mini Giant slide! (we avoided the kidway on our trip). We all went down the GIANT giant slide together, me with Rudy on my lap. I am mildly uncomfortable with heights and so found the giant slide mildly terrifying.

I keep waiting for it to click for me, that thing that makes you a fair person, that is. After 3 years of fair going it still has not happened, but I do it for the children . Sigh.