Around 1:30 this afternoon, we realized that Eleri was still awake, and had little plan of sleeping (perhaps it was the lollipop she had as reward for her first haircut- that's up next.) So we had the rare opportunity to head out for an afternoon activity as a family. Because the snow was melting and the weather mild, and because we couldn't handle another trip around the block with the girls on bikes (Clio asking for a push every few seconds and guidance around corners, Eleri refusing to put her feet on the pedals and steering off the sidewalk on a regular basis), we headed off to Pearl street, the main drag of Boulder's "downtown." As is so often the case, we were not the only ones with this genius idea, and the Pearl Street walking mall was so full of people reveling in spring, it felt a bit like a festival. Especially when you consider our activities, which included getting a baloon flower and "bonker" from the balloon man, a long-time staple on Pearl street (in fact, I overheard someone say he's been there as long as they've been in Boulder- some 30 years) 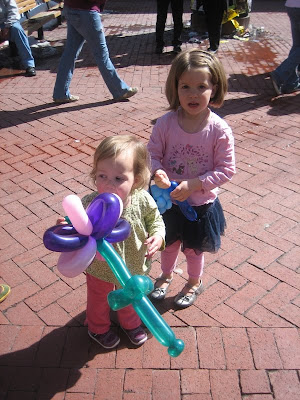 Playing chase on the footbridge 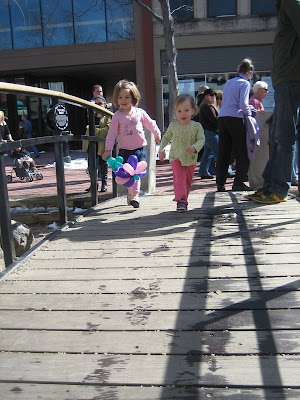 Rock climbing (hey, we're in Colorado, after all) 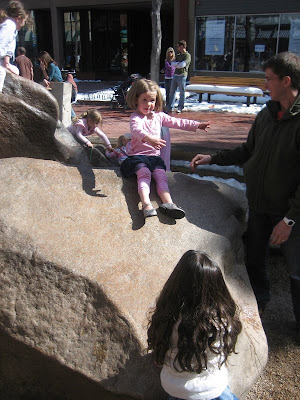 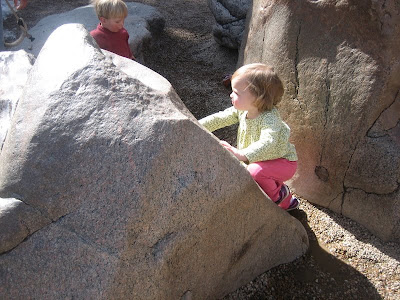 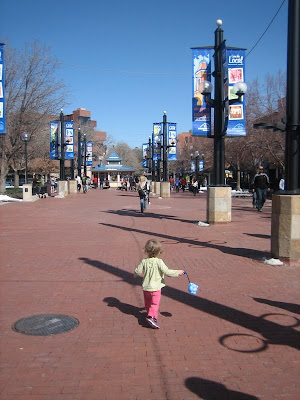 Clio loved passing under awnings, where the snow was melting in such rivulets that it sounded like it was raining; she stood by the edge of an overhang and hold out her hand to catch the water.

other than running free, Eleri's favorite bit seemed to be this awesome marble tree, at the equally awesome Into The Wind kite and toy store (another Boulder Institution.) She sat here and ran marbles down the tree for half an hour or so. 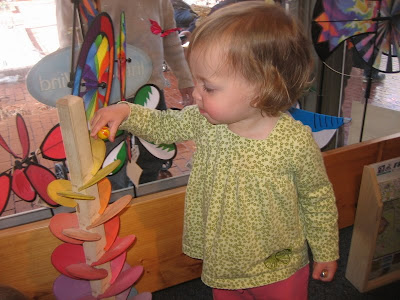 Without further ado, we say: welcome, spring! (Until the next snow, of course.)
Posted by Heather Peterson at 10:21 PM