First of all, I'm going to go right ahead and pat myself on the back: a minor milestone for a second child, and I TOOK PICTURES!

This was actually the second attempt at Eleri's first haircut, and I'm not so sure I took the camera the first time, so I suppose I had the benefit of a second go round. Eleri's hair has been a combination of scraggly and ratty for quite some time now, but last time I got her an appointment at Lollylocks, where Clio has been having her hair done (I know, I put it that way on purpose, just for fun), we walked one foot in the door and Eleri started shaking her head and saying "oooohn," which was "no" before she recently discovered the "n."

At any rate, for a repeat performance, I knew I needed a strategy. The first time around, I went alone, on a busy Saturday. Today, I dragged everybody. Reinforcements. We had the second appointment of the day, so the salon was quiet. My plan was multi-fold: For starters, Clio got into the chair first. The chair, importantly, was actually a car. Facing a TV, which happened to be playing Happy Feet. It was critical that desire build in Eleri, and sure enough, as she watched Clio in the car-chair, she got more and more, well, jealous, I guess. She wanted in. Yes! But, Clio's cut was taking too long, and I was afraid that Eleri would either lose the desire for that coveted seat, or- entirely possible- have a meltdown. So I talked Clio out of the chair when her cut was complete but before her "styling" could commence, and plopped Eleri in.

And you know what? It worked!
For all of 3 minutes, while the stylist sprayed her hair with water (confusing) and combed it out (terrible.) 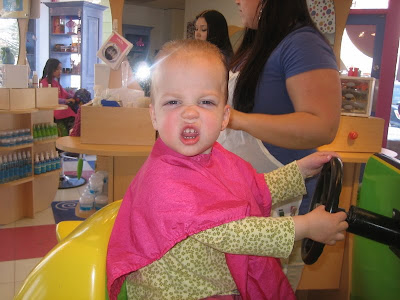 Do you think I was out of tricks? Dear reader, you underestimate me. I whipped out the fresh-from-Costco twisted strawberry fruit snack and handed it over. An excellent distraction though, for some reason, it made Eleri want to look to the side. 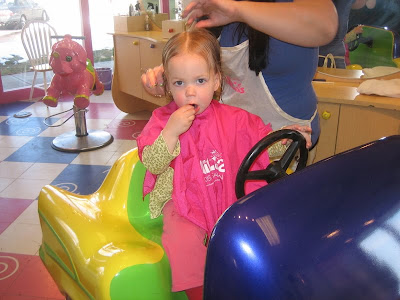 So I stood in front of the Car and acted like some kind of airport ground control, waving and directing and keeping ALL EYES ON ME. Well, that child finished her fruit twist in record time, and I was about to go deep and give her a lollipop to keep her occupied, but, mercifully, the stylist was done.

Of course, Clio still had to get back in the car-chair to get her twisty ponytails, butterfly clips, and glitter (these three items are the reason that Clio will volunteer to get her haircut any day of the week). And now that we wanted her to get down, do you think Eleri was going to relinquish her hold on that sterring wheel? No, she was not. Stylists in kid salons are very flexible people, so ours just put both girls in the car and gamely proceeded to twist up Clio's hair, despite the shrieking from future NASCAR-driver Eleri. 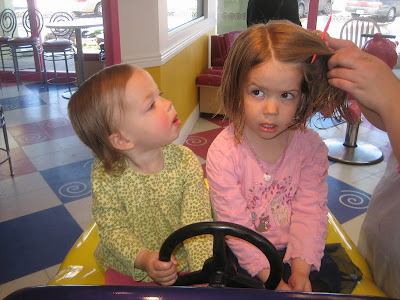 All's well that end's well, and all around lollipops, plus glittered hair, is certainly a well end. (For the rest of the afternoon, Clio kept asking "is there still glitter in my hair?" We assured her that there was.) 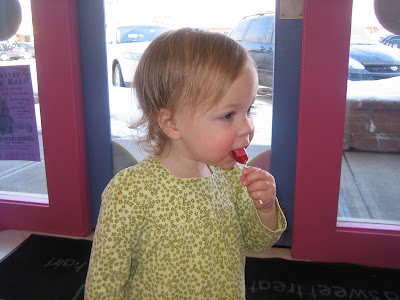 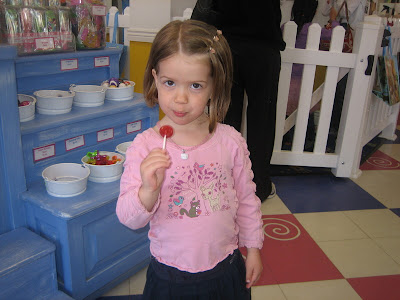 Posted by Heather Peterson at 10:37 PM

Love the picture of the two girls in the car. So cute. Yes, mommies have to be crafty, stealthy and prepared for certain events.

It sounds like quite an adventure. I'm still butchering, I mean cutting, Deston's hair myself in name of thriftiness, though I have my eye on a salon in Bay Ridge that has a race car.