Where Did My Baby Go?

She has been replaced by this little girl. 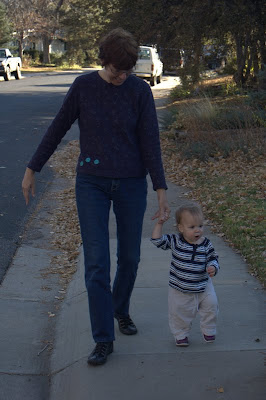 This little girl is an acrobat. The other day, we heard her squawking from down the hall. When we went to get her, we discovered her sitting in the middle of the dining room table. This evening, I was sitting on the floor with Clio in front of an armchair, when I saw a blur of motion. I turned just in time to catch Eleri as she leaped--yes, leaped--from the seat of the chair. We think she may have been inspired by some leaf-jumping action from the weekend: 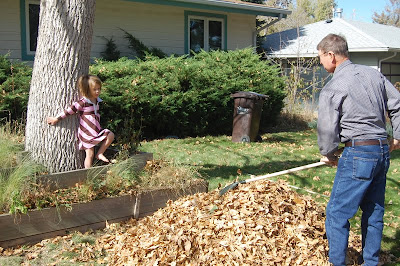 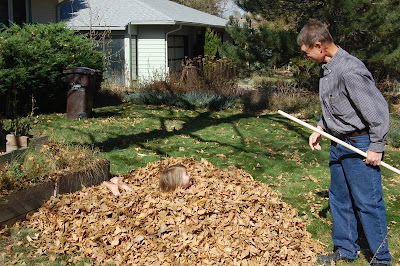 Here she is climbing into an "experimental" chicken coop at the Boulder Museum of Contemporary Art. 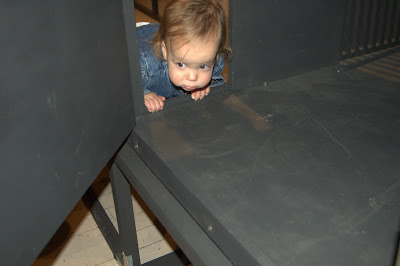 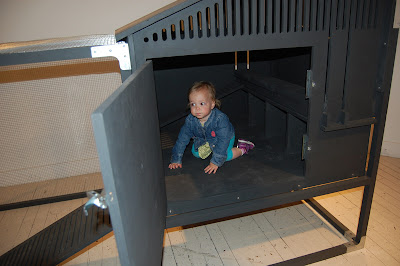 And here she is, riding a sled through the leaves, though really she prefers to ride her sister's scooter or tricycle. I'll have to get pictures of that. 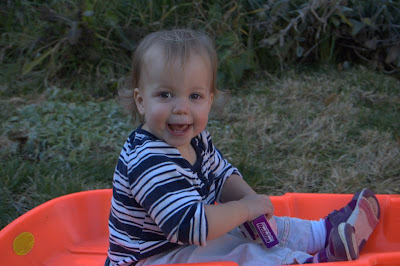 Moe than her baby evil kenevil daredevilry, I think it's the onslaught of language that really makes her seem like she's leaving the baby days behind. She has been talking for a while now, but we're finally starting to understand what she is saying: mostly "this," "that," "what's this," and, a favorite, pointing and saying "ah ah ah ah" which roughly translates to "oh my gosh, look, look what I see! I can barely control my excitement." This is usually used in reference to squirrels, dogs, and Clio. In fact, it is the sound that Clio often wakes to in the morning.

Additionally, we got a fully enunciated "mommy" and "daddy" recently, as well as "in," "down," and "out." Even her vocab is made up primarily of action words.

Like her language, her walk is not all that well enunciated, and while she can walk from one end of the house to the other, she prefers the speed that comes with the hand of an adult, and I wonder if she will ever decide that it is just as fun, if not as efficient, to get around on her own. The kid grasps your finger so tightly when walking that the tip turns purple. Have I ever mentioned that this girl is strong?

It's funny how much more you notice when you're away all day. Each day contains leaps and bounds that are nearly imperceptible if you stand too close. (Although, those flying leaps onto or off of furniture are pretty unmistakable no matter your working status.)

I'm not sure how to end this post except to say: I guess here I am posting a normal post after all that sturm und drang. We have all these great new pictures from the past week or so, and it seems a shame to let them stand on their own when I can tell you all about them. Have I ever mentioned that I'm a control freak? No? Hmmmm.... perhaps I should add a "control freak" tag and see whether I mention the phrase more or less than the word "Target."
Posted by Heather Peterson at 11:04 PM