So, some time back, I had this idea of what to do with this here blog.  Obviously, I haven't been posting.  It's partly a time thing, and an energy thing, and an I-post-almost-daily-on-another-blog thing.  But it is also a question of what this blog is for, something I have struggled with since moving closer to family.  For the past two years, it has functioned much less as a report on our whereabouts and doings, because, well, the people most interested in those things probably already knew where we were and what we did.  I think there is also an aspect of age/life stage to it.  Dave's mom kept notes as he grew: many the first month, lots the first year, and slowly diminishing until he was about six, and then the baby book is done.  Perhaps this has to do with reaching school age?  They are with us less/ need us differently?  Or perhaps there is less that we feel comfortable taking public as they grow?

At the same time, the piles of paper in this house are majorly out of control.  And these kids make some majorly awesome projects.  Many of them totally independent of any grown up.  And so the idea was born to photograph them and record them here, with the dual purpose of getting them out of the house and creating a permanent record.

I rounded up a bunch of recent work and took pictures.  Clio even modeled some of the projects.  (I know.)  And then....life got busy.  And almost every day I think to myself, I should put that popsicle stick house/ wax sculpture/ nailed sign/ watercolor-paper 3D tent on the blog.

Yesterday Clio made a drawing out of a face using pencil shavings for the eyes.  This kind of ingenious re-use is just so her, and so I finally finally snapped a picture, and am posting it here. 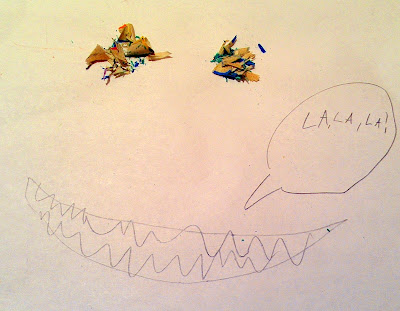 The battery on my phone is so low the camera couldn't use flash.  But this is good: let me manage expectations.  These are not going to be perfectly lit glamour shots that belong on pinterest.  Just a record of what we're making, the great ideas these girls have, more than the execution (though that has its spectacular moments, too).  So now you know the deal.  Some of the stuff I share here might be worth trying at home, but most of it you might just marvel at and move on.