The girls spent some time with their grandparents this weekend. People are always saying things like, "oh, Grandma and Grandpa are spoiling the kids, huh? Letting them run wild?" And Dave and I just laugh and shake our heads and say that we're pretty sure Grandma and Grandpa are doing nothing of the sort. In fact, its kind of nice to have someone else try to get the girls back in line every once in a while, since we're doing such a good job of letting them get so very far OUT of line.

So imagine our surprise, amidst the aforementioned protestations, when we left Clio alone with Dave's parents for about 5 minutes and they took her to a pet store and bought her a pet.
A PET!

To be fair, the pet is a fish and Clio claims she bought it with her own money. Since she doesn't really have her own money outside of her savings account and 529 plan--any spending money, as it were--we asked her to clarify, and discovered the change used to procure this new beta fish was taken from the change drawer that Dave keeps on his dresser. Crafty girl.

A while back, Clio fish-sat for Dorothy, a male beta fish who looks an awful lot like this one, and who belongs to Lola, the 6-year-old who lives across the street. Clio adores Lola and is constantly suggesting that we invite ourselves over to play. The fish-sitting went well: Clio mostly remembered to remind us to let her feed Dorothy, and the fish was returned in one piece after a week in our three-year-old's hands. We can only hope that the attention span for a 3-year-old minding a fish is longer than a week, because the man at the pet store swears that betas live long lives. 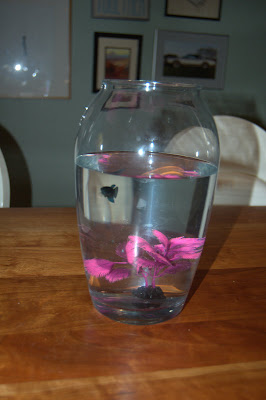 I have to admit, I like the blue fish combined with the hot pink plastic seaweed Clio chose, and the curve of the tall "bowl" that Grandma picked up at the Goodwill. I like the way they placed all of this in the center of the table, and the way it does actually make a pretty nice centerpiece. And I like that they named the fish Swimmy, after (I suppose) this Leo Lionni book of the same name, which we recently borrowed from the library. The name Swimmy is almost as good as Rupret, one of my goldfish in college, who was named after the Steve Martin character in Dirty Rotten Scoundrels. I'm just sayin.
Posted by Heather Peterson at 12:26 AM

we had a beta fish that lived for almost three YEARS, and finally died of old age! good luck, clio!

I had a Beta named Mona when I was maybe 7? I could never quite reconcile myself to the fact that she wasn't a cat. I hope Clio has a great time taking care of Swimmy. Something tells me she'll be a conscientious pet owner.