This morning, while helping to carry the laundry basket back to my room, Clio discovered some money in the bottom that had shaken loose from our pockets, and asked if she could have it. I suggested that we put it in her piggy bank, which she thought was a great idea. After depositing the dime and a penny or two in her pig, Clio told me that once her bank was full, she was going to open it up and "send it across the world, to a place where they don't have money."

I looked at her and paused, wondering if they've been talking about Haiti at school; I've been struggling with whether to talk to her about something that is surely quite abstract for a 3 year old. Seeing my opening, I dove in, and told her that there was a poor island not too far away, and that they'd had an earthquake, that the earth shook and buildings broke and people were hurt and hungry. I asked if she had heard about this at school, but she told me no.

A little later, I told Dave what she had said, feeling very proud at her altruism. When I finished recounting our conversation, Clio said, "and now I'm going to send them my money, so they can put it down on the ground where it got broken, and fix it." 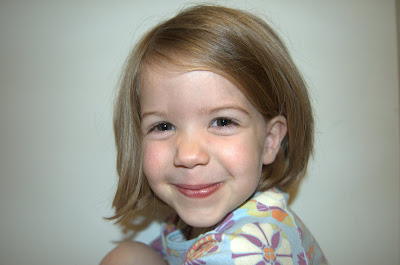 What we will likely actually do is to purchase extra diapers and give them to the elementary students at her school, who are collecting supplies for a local aid organization to send to Haiti. But I must say, I love the simplicity of the three-year old vision for foreign aid.
Posted by Heather Peterson at 11:09 PM

Watch for a post about Laila and Haiti. I've got it scheduled for sometime in the next week, I think. The fact that our little ones feel so empowered is, I think, remarkable. Yeah us!